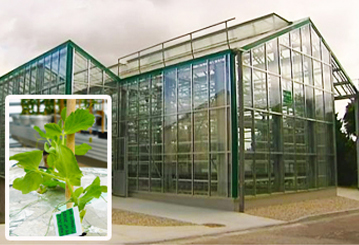 Dijon's High-Speed Phenotyping Platform is a one its kind tool for carrying out non-destructive testing of plants in perfectly controlled conditions. A high-tech tool at the service of developing plant varietals perfectly adapted to changing climatic conditions.

Imagine a huge building, enclosing adjustable greenhouses and climate-controlled chambers within which thousands of plants are growing on automatic conveyer belts, under surveillance by various types of cameras... No big brother has not come to the plant world, you are actually inside Dijon's High-Speed Phenotyping Platform (Plateforme de Phénotypage Haut Débit - PPHD) that was opened in 2012.

Its mission is to characterise plant phenotypes - in other words, all the observable characteristics of an individual living being that correspond to the genotype (the expression of its genes) but also to its environmental factors. A one of a kind, this platform allows the scientists of Dijon's Agro-Ecology research unit, and more widely the national and international scientific community, to make use of its "high tech" equipment to grow and carry out non-destructive testing of plants in perfectly controlled conditions.

"We need to determine the phenotypes of cultivated plants and to focus on interactions between plants and soil-based microorganisms, be they pathogenic or beneficial, as well as the effects of the abiotic environment (soil structure, mineral content, climatic factors etc.)," explains Christophe Salon, INRA research director and the scientific director of the phenotyping platform. This means being able to systematically explore the natural or induced genetic diversity of plants and their adaptations to fluctuating, and sometimes stressful, environmental conditions. For this reason, it was necessary to equip the new phenotyping platform with both a high-volume capacity and a range of precisely controlled parameters.

Plants under the camera's eye

The phenotyping platform is the endpoint of a project started in 2006, funded by INRA, the Burgundy regional council and both French national and European funds and is already involved in several European projects such as ABSTRESS, ARIMNET and the European Plant Phenotyping Network (EPPN).

The Dijon platform is equipped with a number of innovative features including two phenotyping systems, based on image analysis on different wavelengths of light. These allow scientists to characterise various biological units with the aid of nondestructive methods. "This means of phenotyping can be carried out either on a very high number of plants on which we take a limited number of measurements, or on a small number of plants, but characterised at a higher frequency," explains Christophe Salon.

Adapted to small sized units (seeds in petri dishes, seedlings or even colonies of micro-organisms, this first phenotyping system is equipped with a mobile camera able to cover the entire zone of measurement. The second system - intended for larger units such as plants in pots or in rhizotrons (more on this below) - uses fixed cameras in front of which plants are carried around the growing area by conveyer belts. The cameras naturally take into account visible light spectrum, but also infra-rouge or even fluorescent light, allowing scientists to use "reporter genes" to follow the level, the frequency or the expression site of a particular gene.

Another original tool used in this platform are the rhizotrons mentioned above: consisting of two panes of glass between which are placed soil and the root system of the cultivated plant, this equipment allows researchers to visualise the interaction between the plant and soil-based micro-organisms, resulting for example in the formation of nodes in pulses. "This research is very important for understanding root systems, which are of great interest to scientists but tended to be ignored as they are hard to access," Christophe Salon reminds us. The only tool of its kind in the world, a thousand or so rhizotrons have been progressively installed in the phenotyping platform, providing a previously unseen glimpse of what is going on below the soils surface.

Are you interested in Vitagora's actions or network around the topic of Agroecology or AgTech?

The various realities, and opportunities, of urban agriculture in France
Agroecology: high throughput phenotyping for a sustainable and productive agriculture
UMR Agro-ecology and LabEx SPS: a fantastic potential for plant research
Is fat our 6th taste?