The perception of food products by consumers depends on many intrinsic and extrinsic factors. Among the extrinsic aspects are messages relating to products, in particular those associated with "good taste" or "good health". What influence do these messages have on the aroma perception of food products? Find out more with the results of a study applied to comté cheese.

Consumers' perception, appreciation and selection of food products depend on a large number of factors. While the perception of food is influenced by their intrinsic sensory properties, it is also influenced, in surprising ways, by a set of extrinsic factors. Among the extrinsic factors, messages (or "labels", using the accepted academic term) relating to products have been the subject of numerous studies concerning their influence on overall taste perception. On the other hand, few studies have investigated the influence of messages specifically on the perception of aromas.

In this context, the LINC research unit (Integrative Research Laboratory in Neurosciences and Cognitive Psychology), of the University of Burgundy Franche-Comté, has explored the role and influence of messages on the perception of the aromatic intensity of comté, one of France’s most popular traditional cheeses.

Laurence Jacquot is a lecturer at the Integrative Research Laboratory in Neurosciences and Cognitive Psychology (LINC research unit) at the University of Burgundy Franche-Comté. His research projects focus on the study of olfactory and trigeminal modalities (that is to say, in connection with the trigeminal nerve) in the processes of perception and processing of olfactory information, and on the role of the nature of odour stimuli (in particular, their hedonic valence) in these different processes.

A first axis of his research concerns the exploration of chemosensory function and the affective responses to smells in different categories of individuals: healthy, pathological and/or elderly, and in development (school age). A second axis concerns the general link between olfaction and eating behaviour and the influence of cognitive factors on these two functions. Other studies focus on the influence of exposure to different categories of smells on food choice intentions through visual exploration of food and non-food images. Finally, Laurence Jacquot is currently carrying out a study of the influence of the stimulation pathway (ortho vs. retronasal) on the hedonic perception of smells, with application to the aromas of comté cheese.

The Integrative Research Laboratory in Neurosciences and Cognitive Psychology

Directed by Emmanuel Haffen, the Laboratory of Integrative Research in Neurosciences and Cognitive Psychology of the University of Burgundy Franche-Comté develops two research axes:

The perception of a food product: an area subject to influence!

The influence of intrinsic factors

Intrinsic factors are directly linked to the organoleptic qualities of a food: colour, smell, texture, aromas, etc. We now know, thanks to numerous studies carried out on this question, that these signals will have a huge influence on a consumer’s perception and evaluation of food products. “Of all the aspects of the products, colour has been by far the most studied visual parameter over the last few several decades,” confirms Laurence Jacquot.

For example, most people have heard of the experiment of adding red food colouring to white wine: even with experts (in this case, oenology students - article in French), were taken in. Also on the influence of colour, a study carried out in 1980 showed that the addition of colourings biased judgment regarding the identification of aromas: nearly 20% of the participants in this study were convinced that they had drunk an orange drink, because it was coloured orange, whereas it was actually cherry flavoured. “Overall," explains Laurence Jacquot, “the results of all the studies carried out on this subject indicate that individuals, on the basis of their experience, associate certain aromas or certain flavours with specific colours…”

The hedonic judgment (i.e., the degree to which a stimulus is considered pleasant or unpleasant) of a food is not only influenced by its smell, flavour or colour, but also by its texture in the mouth and by the sounds created during chewing (the crunch of crisps, the crunch of a puff pastry, the crunch of an apple).

“We can easily imagine the impact that this influence of perception can have on the consumption of a food product, on our appetite for this food, even on our purchasing intention.”

The influence of extrinsic factors

These are non-sensory factors, such as price, brand, packaging, information and messages (or "labels" in the English terminology generally used by researchers) associated with the food products. "Numerous studies carried out in this field show that the labels have a huge influence on sensory evaluation, the palatability of foods (that is to say, their hedonic appreciation), or food choices and preferences of consumers," says Laurence Jacquot.

For example, a study conducted in 2009 (Okamoto et al.) proved that aqueous solutions containing a few basic flavours were found to be more pleasant and more familiar when paired with food names ("lemon", " sweet caramel”, “soup”…) than when presented with random numbers (“solution 23”).

"Likewise, the fact of mentioning the name of certain ingredients can bias, positively or negatively, the sensory perception of a product," continues Laurence Jacquot. Thus, a study carried out in 2002 showed that an energy bar marked “contains soy” was evaluated as grainy and bland, compared to the same product presented without any label (Wansink and Park). “In reality, neither bar contained soy! ," says Laurence Jacquot. “This suggests that the projection or the expectation horizon created by the information given has a huge influence on the perception of the food product.”

Other studies have also looked at the influence of messages associated with food products on the perception of their healthy character. For example, several studies have shown that “organic” foods obtain a better nutritional evaluation (fewer calories, better fibre content) and are perceived as being better for the health than equivalent conventional products (Lee et al., 2013). On the other hand, they can also be judged less tasty (Schuldt and Hannahan, 2013).

“All these studies have focused more on evaluating the hedonic or healthy character of food products,” adds Laurence Jacquot. “We wanted to go further by focusing on sensory perception itself, with the perception of aromas and their intensity. This is one of the essential elements in the appreciation of food and consumer choice.”

The Laboratory of Integrative Research in Neurosciences and Cognitive Psychology of Besançon, in collaboration with the CSGA of Dijon, then proposed to the CIGC (the professional association of Comté cheese producers) to carry out a study aimed at examining the potential influence of the label on the perception of aromas in Comté cheese. “Comté, given its richness and diversity of aromas, seemed to be a good study model.”

“The objective of our study was to determine how the consumers' perception of aromas will be influenced according to whether we associate a health or a good taste label.”

The experiment involved a panel of 90 participants, students of the University of Burgundy Franche-Comté, with an average age of 23 years, untrained in sensory evaluation. Two cheeses were used: an 18-month-old Comté and, as a “control cheese”, the much less tasty Emmental cheese.

For each cheese, 3 randomly distributed groups of 30 participants were organised:

In each group, the instruction was to evaluate the intensity of one of the following aromas, on a scale from 0 (= absent) to 10 (= extremely present), at each tasting of a cube of cheese: apricot, mushroom, caramel, coffee, orange, pepper, grapefruit, nuts, milk and vanilla.

The scores for each aroma were then added up by the researchers to obtain a total score, ranging from 0 to 100, and corresponding to the “overall intensity” of perception of the cheese's aromas.

But Laurence Jacquot underlines the importance of having a food product that is intrinsically rich in aroma: “In fact, we did not observe these results for Emmental cheese. Our hypothesis is that Emmental does not have enough aromatic intensity.”

For Laurence Jacquot, the world of olfaction, aromas and their perception is fascinating. “It is a vast world, under the influence of our environment, sensory stimuli, emotions, disorders or pathologies, and which impacts a multiple of behaviours, such as eating behaviour or social interactions. Today, it is widely accepted that the loss of smell is associated with a decrease in the quality of life and, very often, with depression - which news related to the Covid-19 pandemic has highlighted.”

At the same time, the process of food choices and preferences is extremely complex. Following this experiment, other hypotheses remain to be clarified as to the influence of messages on the aroma perception of a food product - and consumer preferences.

An influence that varies with age: the hypothesis of influence resistance?

"The results speak for themselves," she confirms: "The effect linked to the labels is present only in the group of young people (15-26 years). In the oldest group (30-65 years), labels have less impact.”

Among the hypotheses to explain this variability, Laurence Jacquot mentions better information about the product. “There may also be a form of resistance to influences, developed through product experience. Finally, we hypothesise that the "good for health" label takes on more importance and is seen in a more positive way with age.”

Perception of aromas and food consumption

For Laurence Jacquot, the results of the study raise other questions: "We would like to know whether modifications in the aroma perception of a food, induced by these two types of labels, are likely to affect how much people eat."

The results of previous studies show that the perception of the "healthiness" of a food is inversely correlated with satiation – in other words, you eat more of foods you think are healthy. She theorises that this effect could be partly linked to a lowered perception of aromas, which would therefore lead to eating greater amounts.

To find out more about the research carried out by the Integrative Research Laboratory in Neurosciences and Cognitive Psychology, or to get in touch with Laurence Jacquot, contact Mélissa Nourry: melissa.nourry@vitagora.com. 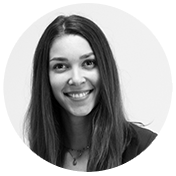 A food engineering graduate from Montpellier Supagro, Mélissa takes great pleasure in the variety of topics that she deals with in her work as a Vitagora innovation engineer, in particular the scientific and entrepreneurial projects of the Vitagora's members for whom she provides support.

If you want to find out more about the research of LINC, or to be connected with Laurence Jacquot and her team, contact Mélissa Nourry : melissa.nourry@vitagora.com.