Doughnuts, battered and breadcrumbed foods, french fries... Deep frying is a very popular method of cooking, especially at home. The problem remains, however, of the associated fat content and its nutritional implications. How does the frying process work? What role does the cooking appliance play on the result obtained in terms of fat content? Can it be improved, especially at home? Here are the results of the Fry'In project accredited by Vitagora.

The French love fries. A popular and festive dish, fries bring together generations of consumers around the pleasure of eating. According to a study conducted by CNIPT in 2015, 87% of French people eat fries at home and 68% eat them in a food service setting (restaurants or fast food outlets - source). What makes a great french fry? It must be “crispy” for 79% of those questioned and… “cooked in a deep-fryer” for 69%, that is to say, by immersion in oil.

The problem: due to the oil impregnation and the oxidation of frying oils, deep-fried foods do not present a positive nutritional profile - between 10% and 15% fat for a fry, up to 40% for crisps - and a risk of degradation that can reach toxic levels.

The research group UMR SayFood (formed by the merger of the two laboratories UMR GENIAL and UMR GMPA) has been interested since the mid-1990s in improving the deep-frying process, and in particular as part of Fry'In, a joint innovation project that concluded at the end of 2018 and was accredited by Vitagora.

Giving fries an image makeover so that they are healthier even if cooked by immersion: is this a fantasy… or a question of technology? How to optimise the deep-frying process, at consumers' homes and in restaurants, to limit the toxicity and the fat content of fried products? What what role can a fryer play?

Olivier Vitrac, researcher at the French National Institute for Agricultural Research (INRAE) within UMR SayFood, and a specialist in transfer phenomena in food and packaging, gives us a few answers.

UMR SayFood is a multidisciplinary research group with a pragmatic approach to the preparation of foods: this means they take the multiple characteristics of the final product (organoleptic and nutritional properties, health and safety, ease of preparation, etc.) and the expectations of consumers as targets to be reached by controlling product-process interactions. UMR SayFood relies on its expertise in the following fields: process engineering; physico-chemistry and structures; engineering of (bio)chemical reactions; engineering of interfaces and material transfers; health and safety; contaminants; consumer behaviour; metrology; modelling and simulation.

In January 2020, UMG GENIAL merged with UMR GMPA to form UMR SayFood. The new unit is fully integrated into the University of Paris-Saclay and its two entities “Life Sciences and Health” and “Engineering and Systems Sciences”.

Olivier Vitrac is a researcher at INRAE, specialising in the analysis of transfer phenomena at a molecular level. A graduate of AgroSup Dijon and ESPCI Paris, Olivier Vitrac started his research on the frying process (a thesis at AgroParisTech) before joining INRAE in 2001 to study the phenomena that control the migration of substances from packaging. By joining UMR GENIAL in 2006, he continued his research activities around frying with the tools and concepts of the physics of dense media.

Olivier Vitrac is motivated by the desire to rethink the very foundation of engineering sciences: "safety, environment and resilience must become central - and can no longer arrive at the end of a production process." His research work thus aims to set up a more wide-ranging engineering approach integrating, via modelling, a large number of scales of focus (molecules, products, processes, consumers, sectors) and and able to explore a greater scope of possibilities.

The Fry'In project: for healthier frying at home and in food service 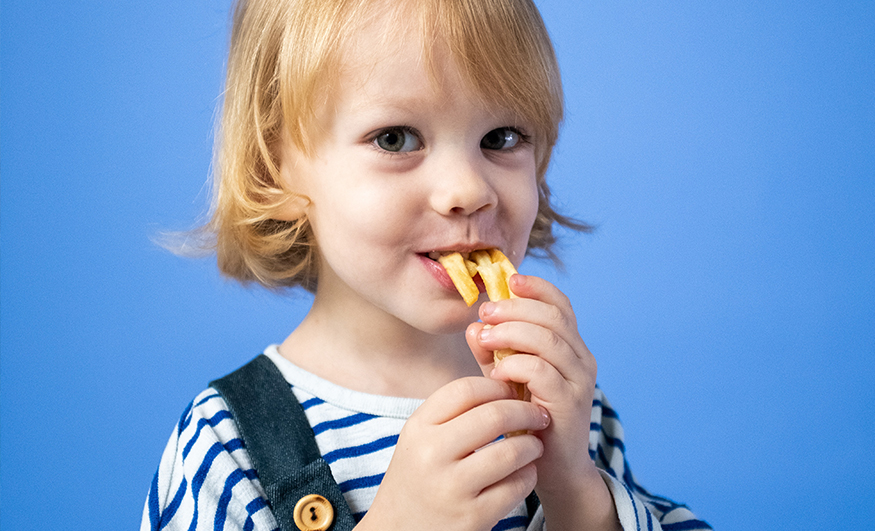 French fries at home: left behind by R&D?

Although the phenomenon of deep-frying has been studied as part of the improvement of industrial processes since the 1990s, the process in the context of home cooking or food service has not benefited much from technological advances, until recently.

Olivier Vitrac recalls: “The first studies on frying date back to the mid-1990s. Our laboratory currently has 8 theses underway on the subject. Earlier research we have done has enabled the food industry to reduce the fat content of fried products: our laboratory helped the McCain group to explore strategies for reducing oil impregnation by 70%!

“But these technological solutions had not been transferred to small appliances, especially at home, where the equipment is still largely under-optimised. We therefore wanted to focus on the optimisation of domestic deep-frying devices, from 3 to 5 L, as well as those from 15 to 25 L as used by food service (in canteens, etc.).”

From this observation, the Fry'In joint innovation project emerged in 2014. Accredited by Vitagora, and bringing together the UMR SayFood research laboratory, the Carnot Institute in Burgundy and the companies Adventys, Ethera, Lesieur and the SEB group, this project aimed to develop new domestic and restaurant processes for deep-frying with the goal of:

To address this challenge, the FRY'IN project aimed to work both on the engineering of deep-frying processes, but also on the interactions between the food products used during frying (oil/potato-type products).

Who would have thought that this comfort food, subject to a friendly Franco-Belgian dispute regarding its origins, would present such a challenging subject for scientists in physics and chemistry? While an everyday cooking process throughout the world, deep-frying is the result of a complex, “quick and brutal" physical phenomenon, according to Olivier Vitrac.

That moment when the fries get greasy

Understanding how frying works has been an important part of the Fry'In project. "To optimise frying, it was essential to describe the phenomenon very precisely and with a physicist's approach," says Olivier Vitrac.

"Batch" deep frying constitutes the area of study of the Fry'In project. “In this type of frying, it is not the frying that forces the fat into the fries. This is in fact the very brief moment when the fries are removed from the oil.”

Plunged into an oil bath at 180 °C, frying creates a steam barrier that prevents the oil from penetrating. As soon as the fry is removed from the frying bath, the temperature drops, the barrier effect is no longer there, and the oil is absorbed in a tenth of a second. “From a physical point of view, it would therefore be the act of removing the fry from its hot oil bath, and not of immersing it, which would allow the oil to penetrate.”

Getting to the heart of frying

How is the film of oil formed which clings to the fry? How thick is it? How to remove it most effectively? How does the oil behave at the start of cooling?

Quantification of oil absorption during frying, imbibition mechanisms, characterisation and modelling of the oil flow and drainage mechanisms, oxidation... To accurately understand the phenomenon of deep frying, the GENIAL laboratory used equipment that is unusual in the field: infrared spectroscopy and imaging in ATR mode, photo-ionisation, DSC measurements, rapid imaging.

“We discovered some surprising things! ," says Olivier Vitrac with a smile. “For example, we now know that oxygen disappears 5 mm below the surface of the fry: mineral oxygen becomes chemical oxygen. These are the hydroperoxides, which are also the source of odours and toxicity.”

All the negative aspects of deep frying were thus explored within the framework of the Fry'In project. “With all this knowledge, we were able to develop a fryer that can reduce the oil absorption by the fries. And we started to see a connection between the design of the fryer, the process and what happens on the fry.”

Reinventing the very concept of a fryer

“The central question was then: what to add to domestic batch frying to obtain less oily fries? ," summarises Olivier Vitrac. Two prototypes of “new generation” fryers have emerged as part of the Fry'In project: “We completely rethought the concept of a deep-fryer,” he adds.

A first version of a 2-meter-high prototype, affectionately nicknamed "wall-e" by Olivier Vitrac in reference to the dilapidated but loveable Pixar robot, made it possible to explore initial avenues for improvement.

“This prototype was really DIY: we basically glued a microwave oven to a fryer. But the first elements were instructive: the frying basket was designed vertically, and microwaves radiation when removing the fries made it possible to maintain the boiling to limit the impregnation of oil. At the same time, drainage was improved by a projected heat source.

Olivier Vitrac continues: “the second version was more successful, and more thought out. This is a concept of frying by magnetron thawing, with an oil bath that goes up and down. The magnetron remains active to maintain the boiling. The avalanche effect is favoured so that the oil slides very quickly into the oil bath, without catching on the fries. Thanks to this runoff, the oil impregnation of the fries is limited.”

This oblong and vertical appliance, which can easily be placed on a table, represents many additional advantages in the eyes of Olivier Vitrac:

Following this prototype, a number of publications were made by UMR GENIAL, in various journals: the Journal of Food Engineering, the Encyclopedia of Food Security, Sustainability, Elsevier, etc. At the same time, several patents have been filed:

It should also be noted that this prototype has been on display at trade shows since the end of 2018, the closing date of the Fry'In project.

These results encourage Olivier Vitrac and his team to go even further around deep frying.

“This is a real breakthrough innovation,” he says proudly. “It is a scientific success, around a complex and interdisciplinary agrifood issue, affecting both the composition and the toxicity of the oil, the design of the fryer, the modelling, the taste, etc. And the adventure of deep frying continues.”

Indeed, recent research, published in 2020 in the Elsevier journal (Revisiting the mechanisms of oil uptake during deep-frying) and resulting from the thesis carried out by Maxime Touffet co-supervised by Gilles Trystram and Olivier Vitrac, suggests that the process is even more complex, for example that other types of impregnation exist from the first minutes of immersion. To find out more, read Maxime Touffet's thesis Transfers and reactivity of oil during the Frying process, available online at this link.

“There is real French engineering expertise in this area. In our laboratory, we want to raise awareness that innovations are possible. We want to shed new light on this ancestral process that, for nutritional reasons, is regarded in an unfavourable light”, he concludes.